2021: A Glance at This Year's Global Startup Environment under a Crypto-Influenced Market 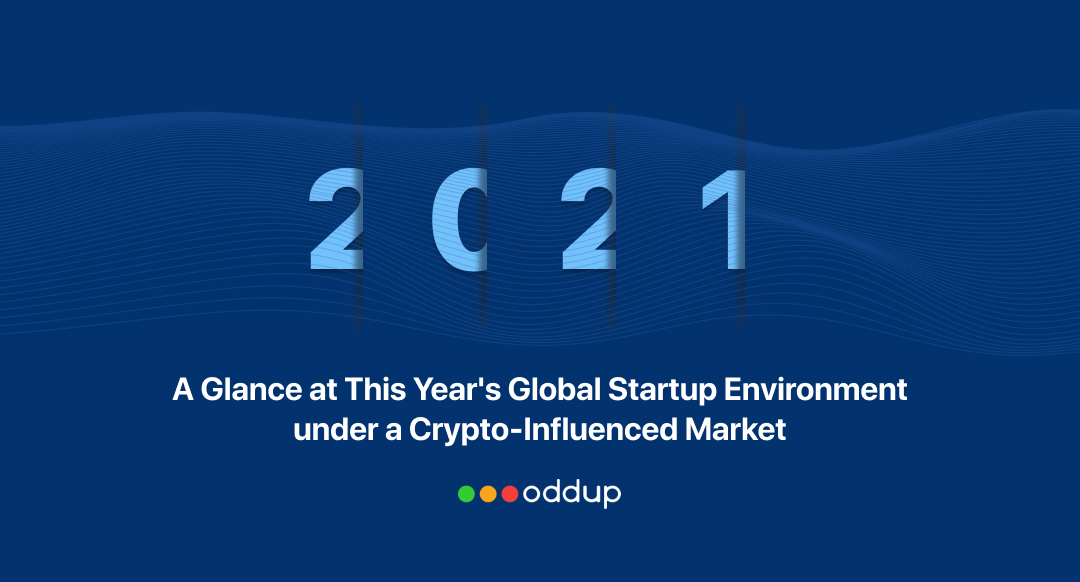 Even as the world is prepared to leave 2020 behind them along with the new variant concern at the end of this year, 2021 have genuinely marked a record-breaking position for the world market landscape and startup environment. To give you an idea of the prospects available this year, 2021 shattered all previous records for US startup investment by a huge margin in just 9 months. From health and wellness technology, e-commerce to blockchain and the SaaS industry, the boom of potential startups was on the rise throughout the year.

Here in Oddup, we monitor entrepreneurship and funding activities in prominent startup hotspots and locations throughout the world while backing them up with data-driven analyses of significant trends in a range of industries. 2021 has been one of the most spectacular times in the worldwide startup ecosystem's journey, and in this insights edition, Oddup is here to assess the best of it.

Despite there are many sectors that have left a significant mark on the startup and investment ecosystem this year, in this insights article we will talk about the most prominent and promising one – the blockchain industry.

Blockchain in 2021: A Quick Look at the Most Influencing Technology

We've seen Bitcoin reaching new all-time highs, as well as the establishment of a valid legislative structure in so many nations that are already having a significant influence on the business and attracting financial support from major corporations. Common people's interest in crypto has soared this year, thanks in large part to influential figures like Elon Musk and Jack Dorsey.

In many respects, 2021 was a major turning point for the cryptocurrency industry, as well as the blockchain and Web 3.0 ecosystems. In 2021, Web 3.0 inventors – who are creating decentralized apps backed by blockchain – are also striving to grow current blockchain technology. Fund managers are seen to be interested in participating in the Web 3.0 transformation.

The year 2021 was certainly the 'year of cryptocurrency,' with momentous headlines in the cryptocurrency sector all around the world. As we’ve neared the end of 2021, here's a rundown of all the major events that aided crypto's ascension into the masses.

In 2021, renowned figures such as Elon Musk, Mark Cuban, Jack Dorsey, and others began promoting cryptocurrencies in public venues, bringing cryptocurrencies to the forefront. This year, the top 10 searches on Google in the news section were "Dogecoin" and "Ethereum Price," as per the results. Elon Musk's Dogecoin tweets also contributed to the increased popularity in the currency, indicating that more people are becoming intrigued by crypto.

Crypto has become one of the most popular investment possibilities in recent years as it has gained in popularity. Bitcoin (BTC), Ethereum (ETH), and a slew of other currencies set new all-time peaks this year. Tesla Inc., the electric vehicle organization formed by entrepreneur Elon Musk, confirmed a $1.5 billion investment in bitcoin as part of its new policy, as well as the acceptance of bitcoin as a form of payment for automobiles. Following Tesla's statement in February 2021, bitcoin's price soared to $48,00 – its highest daily hike in more than 3 years – and soon broke the $50,000 threshold for the very first time.

With the auction of an NFT by digital artist Beeple (Mike Winkelmann) for $69 million in 2021, NFTs, or Non-Fungible Tokens, taken the globe by surprise, paving the way for several other additional NFT transactions by creators, performers, entertainers, and the general public.

NFTs are blockchain-connected digital tokens that signify anything distinctive. NFTs are valuable because they can verify the validity of either digital or physical goods. The NFT can't be changed or duplicated, which is especially significant.

In 2021, gaming with NFTs is becoming more popular, with Axie Infinity being the finest example. Axie Infinity is a video game influenced by Pokémon and Tamagotchi that uses NFTs. Exchanging, competing, and even breeding new creatures known as Axis are all ways to earn money while playing the game where NFTs symbolize each unique Axie. The game has over 2 million active monthly players as of October 2021, resulting in a monthly volume increase of 953 percent.

Despite strong internal skepticism of digital currencies and worldwide advisories of consumer concerns, El Salvador became the first government in the globe to adopt bitcoin as legal tender in September 2021. The government of President Nayib Bukele claims that the decision would provide many Salvadorans with access to banking facilities for the first time, saving $400 million in fees on remittances returned from abroad each year.

This approach was met with mixed reactions. On the one side, Bitcoin's price varies more than typical fiat currency, making it riskier to buy everyday consumables with Bitcoin. On the other side, with this decision, people might understand how Bitcoin may be used as a local currency as well as a payment method.

The CBDCs must be mentioned when discussing national currencies. CBDC is a virtual currency based on a central bank-developed blockchain. The Digital Yuan in China is by far the most prominent endeavor in the sector, even though this currency prevails. Trials by the Chinese central bank have previously taken place in locations such as Shanghai. The transition to a CBDC would be intriguing because most Chinese people now use e-payment regularly. Project Ubin in Singapore and Europe's Digital Euro are also another two more significant CBDC initiatives.

Corporations have begun to adopt Bitcoin as a reserve currency where governments are testing Bitcoin and alternative cryptos simultaneously. With increasing degrees of acceptance across all disciplines, it is apparent that cryptocurrencies will play a big role in the coming decades as well.

Startup Investment Opportunities in the Crypto Industry and Beyond

As entrepreneurs embark on respective startup ventures, the majority of them are aware of the necessity of adhering to certain principles. It's not simple to start, develop, and expand a business – especially in a situation where the world is still recovering from the pandemic.

This year has been a record-breaking year for startup investment, with industries like space technology, healthcare tech, and crypto and more becoming more prominent. Startups in more fledgling areas, such as nuclear fusion, alternative proteins, and fintech tools for the creative economy, have also made significant profits.

Below are the top 3 startup sectors that have received a subsequent amount of funding from investors worldwide.

After four consecutive years, venture capitalists in the United States are supporting more cryptocurrency and blockchain startups than in Asia – indicating that China's downturn on cryptocurrency transactions has cooled the country's fledgling sector. However, as China's cryptocurrencies and blockchain enterprises wane, investment funds in the rest of the globe have surged substantially.

The final quarter of 2021 is currently shaping up to be the most active in terms of cryptocurrency startup investment. Internationally, the value of venture capital investments in the sector increased from $3.1 billion in 2020 to $21.3 billion as of November 2021. The worldwide surge is a clear indication that the industry is finally breaking through to the masses.

This year only, with over $9 billion in venture funding was invested in the industry, up more than 50% from 2020. Hardly anything represents 2021 more than a startup formed this year enticing financiers about its aspirations to create an orbital commercialized space vehicle, especially with constant news about billionaires travelling to space.

Renewable power technologies have dominated alternative energy considerations for years. It eventually developed into electric vehicles and batteries. This year, though, appeared to usher in a further phase – centred on the long-held potential of fusion.

The prospect of carbon-free energy piqued many investors' interest, and numerous organisations raised large sums of capital. The optimism for fusion appears to have stemmed from the awareness that the existing sources of renewable energy will not be sufficient to tackle climate change on their own.

We revamped Oddup last year to help investors and B2B service providers locate suitable investments, potential investors, and find sales prospects across a multitude of industries and regions around the globe.

We also added in Crypto tracker, allowing users to get access to useful data, analytics, and insights on top 100 cryptocurrencies sorted by market cap.

Here's everything you receive with the crypto tracker:

We closed $12.8 million in Series C funding this year. The recent investments will be used to enhance the company's worldwide growth and product development possibilities – according to the organisation, with an emphasis on crypto-assets, distributed ledger technology, blockchain, and digital currencies.

With the thriving blockchain industry and numerous potential advanced technologies getting momentum each year, 2022 may be the year when some of such sectors and startups will take off for good.

Fonoa, The tax expert for the internet

A brief Guide to Account-Based Marketing for SAAS Businesses

Can STABLE manage risks for the Agri Sector?